A breakdown can cause the country’s vital facilities and a large part of the population to be cut off. Accidents and large material losses that may occur to enterprises as a result of abrupt termination of the technological cycle are not excluded. Porcelain insulators were installed on the transmission lines owned by JSC “Sakrusenergo” 500 kV ETL “Kartli-1”, “Kartli-2” and 330 kV ETL “Gardabani”. They were replaced by EGH “Kartli-1” and “Kartli-2” before the establishment of the company and until 2006 were replaced on all intermediate masts of these power lines and in the corners of the corner masts. 500 kV ETL on “Kartli-1”, “Kartli-2” and 330 kV ETL “Gardabani” Porcelain insulators have been completely replaced, up to 60 thousand pieces, including 500 kV ETL “Kartli-2” – 40 Up to a thousand pieces of porcelain insulator.

As for polymer insulators, their use on the power lines owned by the company at this stage is not advisable, as they are difficult to detect defects and there is virtually no experience of long-term operation of these types of insulators. 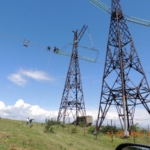